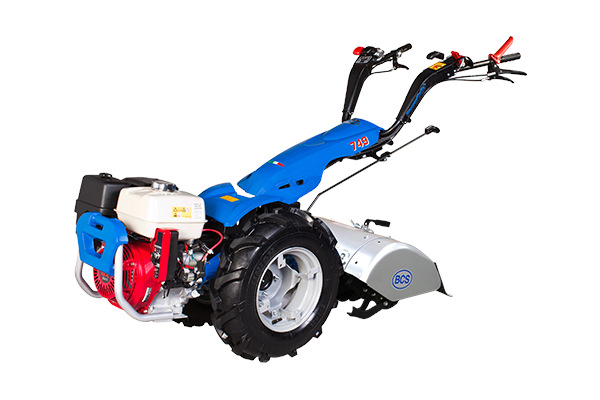 PRINT
Model 749 utilizes three forward and three reverse working speeds and Differential Drive with Lockout for increased maneuverability. The third working speed gives increased production efficiency, especially in mowing applications. As with all PowerSafe models, the 749 does not have a transport speed. One of the main advantages model 749 has over its little sister, the 739, is individual wheel brakes for increased maneuverability. This feature is extremely useful when operating heavier attachments like the 32" Brush Mower. The 749 is equipped with a Honda GX390 in recoil or electric start. For a limited time, model 749 will be offered with 5'' x 10'' or 5'' x 12'' wheels. The 749's PowerSafe clutch differs from standard models by utilizing a hydro-mechanical, “wet” clutch instead of the spring-loaded, double-cone clutch. This clutch is more difficult to overheat because it's in an oil bath and cooled by circulated oil instead of air, as on the standard clutch. It's also better suited for implements requiring higher torque, such as the Flail mower or Chipper/Shredder. The PowerSafe clutch is longer-lasting, backed by a five-year warranty for non-commercial users. It also gives operators smoother shifting, safer operation, and immediate stoppage when the clutch lever is released.