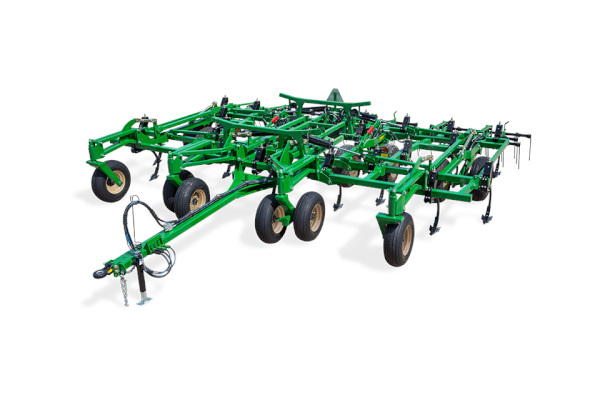 PRINT
In the fall, vertical tillage should eliminate the soil’s density layers, leaving it ready for a one-pass tool before spring planting. Turbo-Chisel® is engineered to size and incorporate residue in the top 8-12" of soil, while leaving the surface level enough for a single-pass tool in the spring. Turbo-Chisel starts by slicing residue with exclusive 22" Great Plains Turbo Coulters on 7½" spacing. Blades run on a 1¾" gang bolt with cast spools, putting the weight “in the gang” for outstanding performance and reliability. Gang bearings are field-proven, PEER® Maintenance-Free 211 Bearings with cast housings mounted to heavy-duty 1" x 3" C-shank standards. Plus, Turbo-Chisel’s coulter depth is hydraulically adjustable for on-the-go depth control. This machine is offered in rigid 7-15 shank models or folding 9-23 shank models, with a recommended horsepower requirement of 30 hp per shank. Units can be equipped with optional chisel shanks, as well as optional Great Plains chopper wheels to crumble clods while leveling soil.

On 7½" spacing, the 22" Turbo blades enter the soil vertically and leave horizontally, causing a mulching action of both soil and residue while maximizing lateral fracture. Competitive concave-disc tools simply cut off and roll long stringy stalks.

Independently control coulter depth from the cab. This allows the operator to make adjustments to the depth based on field conditions.

Adjust the depth across the entire width of the machine in one convenient place.

New 7-lip TillXtreme™ seals on each side of the gang bearings lock in grease and prevent contamination. Additionally, the walking beam pivots utilize coated bushings, eliminating the need for tapered bearings and grease in pivot points. Drop axles pivot on anti-rotational pins, requiring no maintenance.